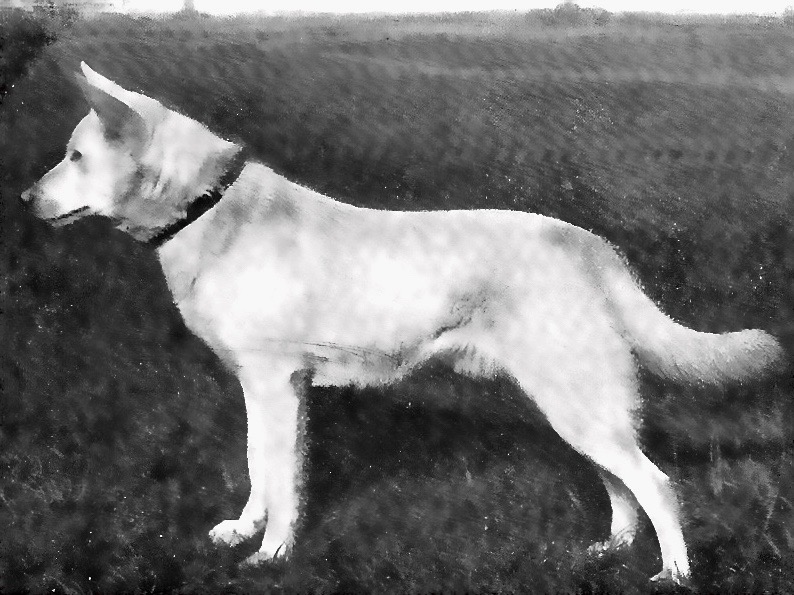 Above: believed to be Greif von Sparwasser

The founding dog of the GSD breed, Horand von Grafrath, SZ1’s maternal grandfather was a white Thuringian sheepdog named Greif von Sparwasser born around 1879. Horand was bred to 35 different bitches, producing 53 litters of which, 140 progeny were registered with the SV. He was also mated three times with his daughters, thus fixing the genetic code into the development of this breed. This genetic code was handed down through his progeny and thus remains with us today.

When did the first White German Shepherds appear in the United States? A litter born March 27, 1917, bred by one of the German Shepherd Dog Club of America (GSDCA) founders Anne Tracy, contained four white puppies - known as Stonihurst Edmund, Stonihurst Eric, Stonihurst Eadred, and Stonihurst Elf. Later came the dog owned by H.N. Hanchett of Minneapolis, MN which was the first White German Shepherd imported from Germany in 1920. Then in 1921, Etzel V. Oeringen (otherwise known as “Strongheart”) was imported to the USA. This dog had strong bloodlines, and produced some of the finest Whites of that era. White GSD’s were bred and kept by such respected early American kennels as Longworth Kennels, Giralda Farms, and Grafmar Kennels.

Why was the white colored German Shepherd Dog disqualified? That is a question that only the German SV and the German Shepherd Dog Club of America can answer. The SV was the first to officially eliminate white dogs from the gene pool through the disavowment of the color in the 1930s. Capt. Max Von Stephanitz, founder of the breed made conflicting statements concerning coat coloration. In his last edition of his book he expressed that a white coat was a sign of “degeneration,” but a few paragraphs later he said… “Our GSD’s have never been bred with special regard to coloring, which for a working dog is a matter of quite secondary consideration.” (Lanting, 1990) By mid - 1930’s, the Nazi party had began to hold a large number of memberships within the SV club. The Nazi party continued to exert more and more influence over the SV, until the point where its founder Capt. Max Von Stephanitz was forced out. By the time of Von Stephanitz death in 1936 the Nazi take over of the SV was nearly complete. The SV put the breed to use for the Nazi party much as the party did with other animals. In the flawed medical and genetic “science” of the Party mentality, all manner of ills were attributed to the gene for the white color coat. Such problems as deafness, blindness, albinism, mental instability, sterility and degeneration and loss of vigor were associated with and blamed on the white dogs. Once these beliefs took root, they flourished and grew, even after the end of World War II.

Even with the breeding population of these dogs at an all time low in Germany after the War, the breeders continued to believe in removing these “degenerative throwbacks” from the remainder of the gene pool. To this day, white dogs remain ineligible for registration as GSD’s within any of the World Canine Organization’s (FCI) member countries. Following Germany’s lead, the German Shepherd Dog Club of America petitioned AKC for the disqualification of the color white from the GSD Breed Standard. This disqualification was approved by the AKC and went into effect on April 9, 1968. It remains so to this day. “Though many feel the (whites) are structurally and temperamentally unsound, there is no scientific evidence of genetic linkage in the breed. The genes for poor temperament or proportions are not side-by-side with the genes for white… the colored dogs and the white dogs may differ only in that respect (to) pigment… structure and temperament are unrelated to color.” (Lanting, 1990)

In the USA and Canada White Shepherd dogs have gradually become to be accepted as a distinct breed. The first dogs of this breed were imported to Switzerland in the early 1970s. The American male “Lobo”, whelped on 5th of March 1966, can be considered as the progenitor of the breed in Switzerland. The descendants of this male registered with the Swiss Stud Book (LOS) and other White Shepherd dogs imported from the USA and Canada, gradually multiplied. There now exists a large number of purebred over several generations White Shepherd dogs throughout Europe. These dogs have been registered as a new breed in the appendix of the Swiss Stud Book (LOS) since June 1991. On July 4, 2011 the White Swiss Shepherd was formally accepted as a dictinct breed by the fédération cynologique internationale (FCI or World Canine Organization), after having had provisional breed status since November 26, 2002. The country of origin for the breed is Switzerland.